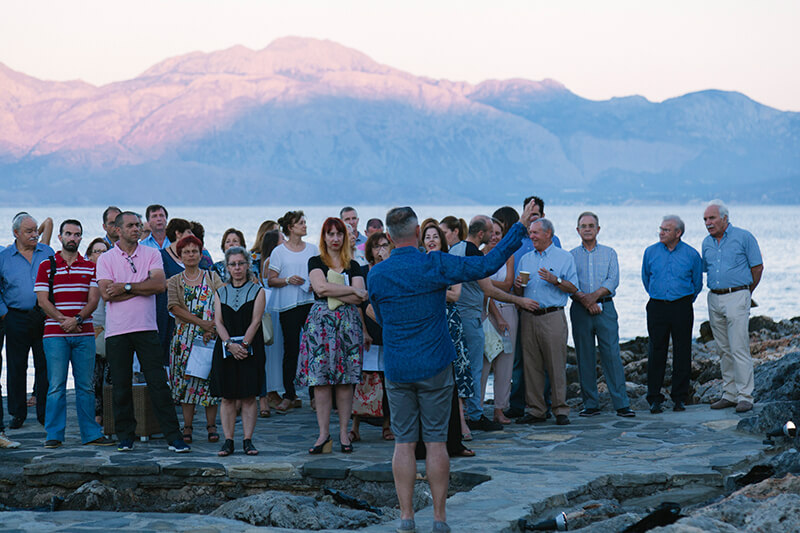 The proclamation of the year 2018 as the year of European Cultural Heritage, coincided with the celebration of the 30th anniversary of the 1st Art Symposium and was the trigger for the organization of the first blueFest Crete, aiming to bring culture and entertainment to the people of Crete and its visitors.

Τhe inaugural blueFest Crete festival took place from 30 June to 2 July 2018, and was organised by the G. & A. Mamidakis Foundation. Against the beautiful backdrop of Agios Nikolaos, one of the most picturesque seaside towns in Greece, it was realised with the auspices of the Region of Crete and the Municipality of Agios Antonios.

The vision for the organisation of the festival is the revival of a tradition dating back to 1988, when the 1st Art Symposium took place, led by the Foundation’s love for the local community and the arts and the belief that tourism should be a holistic, cultural experience.

The G. & A. Mamidakis Foundation chose to celebrate the European Year of Cultural Heritage with a manifold festival combining different cultural artistic activities (art, theater, music, and cinema), aiming at bridging the rich cultural heritage of Greece with new and also traditional forms of artistic expression.

The festival kicked off on Saturday 30 June at Ammos beach, with a DJ set by Eva Boudouri (En Lefko 87,7) and the pop-up movie screening of Mamma Mia! The Movie, which visitors watched underneath the starlight.

In the morning of the second day, the We Dive We Clean volunteer team, in cooperation with the Pelagos Diving Center, dived in the sea area of the harbor of Agios Nikolaos at the invitation of the artist Georgia Kotretsos, in order to clean it from polluting objects that harm the marine flora & fauna.

The divers gathered over 50 kilos of plastic cans, glass bottles, packs and other plastic items.

On the afternoon of the same day, Georgia Kotretsos’ exhibition 4 Cents: On Show for 500 Years opened to the public, presenting a site specific installation of the same name on the beach of Minos Beach art hotel.

The curator of the exhibition, Sotiris Bahtsetzis, presented the installation, the artists’ overall work and spoke also of the Foundation’s collection, located in the Sculpture Garden of Minos Beach art hotel.

4 Cents: On Show for 500 Years addresses global environmental issues such as plastic waste and sea pollution. The ‘4 cents’ refer to the so called ‘environmental fee’ charged per plastic bag, while ‘500 years’ is how long it takes for plastic to decompose in water. Kotretsos asks us to reconsider such notions as personal memory and care in the context of a ‘social contract’ which promotes the impenetrable, impersonal and ephemeral. What does it mean if, given the ongoing pollution, the marine ‘museum of the future’ will consist of waste that does not belong to anyone but to all of us? Since objects alone are not capable of conveying meaning, acquiring a specific meaning lies primarily in the social relationships in which objects participate. Kotretsos is triggered by this trivial object to explore our relationship with our material culture in general and the place of sculpture today.

Petros Klabanis presented latest project entitled Rooftop Stories where bass, loupe, percussion and voice composed an atmospheric trip from the beach of the Minos Beach art hotel to the terraces of the artist’s favorite cities and introduced us to his favorite songs through his own distinct look. The lighting of the show was edited by Semina Papalexandroupoulou.

The day ended with a cocktail party on the beach accompanied by the music choices of Sakis Tsitomenas (En Lefko 87,7).

The festival’s curtain fell on Monday 2 July with the theatrical play Socrates Now produced by and starring Yannis Simonides, and the simultaneous second screening of Mamma Mia! The Movie at Candia Park village.

Yannis Simonidis, the EMMY-winning actor, director and creator of the production Socrates Now presenetd to the public the classic text of the Apology (of Socrates) by Plato, in a multifaceted and entertaining production, with stong political and cultural messages, highlighting Socrate’s sharp wit. The 90 minute monologue was followed by discussion and debate with the audience, an integral part of Simonide’s performance.

At the same time, families enjoyed the summer vibes of Mama Mia! on the beach of Candia Park village, with an ice-cream cone under the stars… old style!