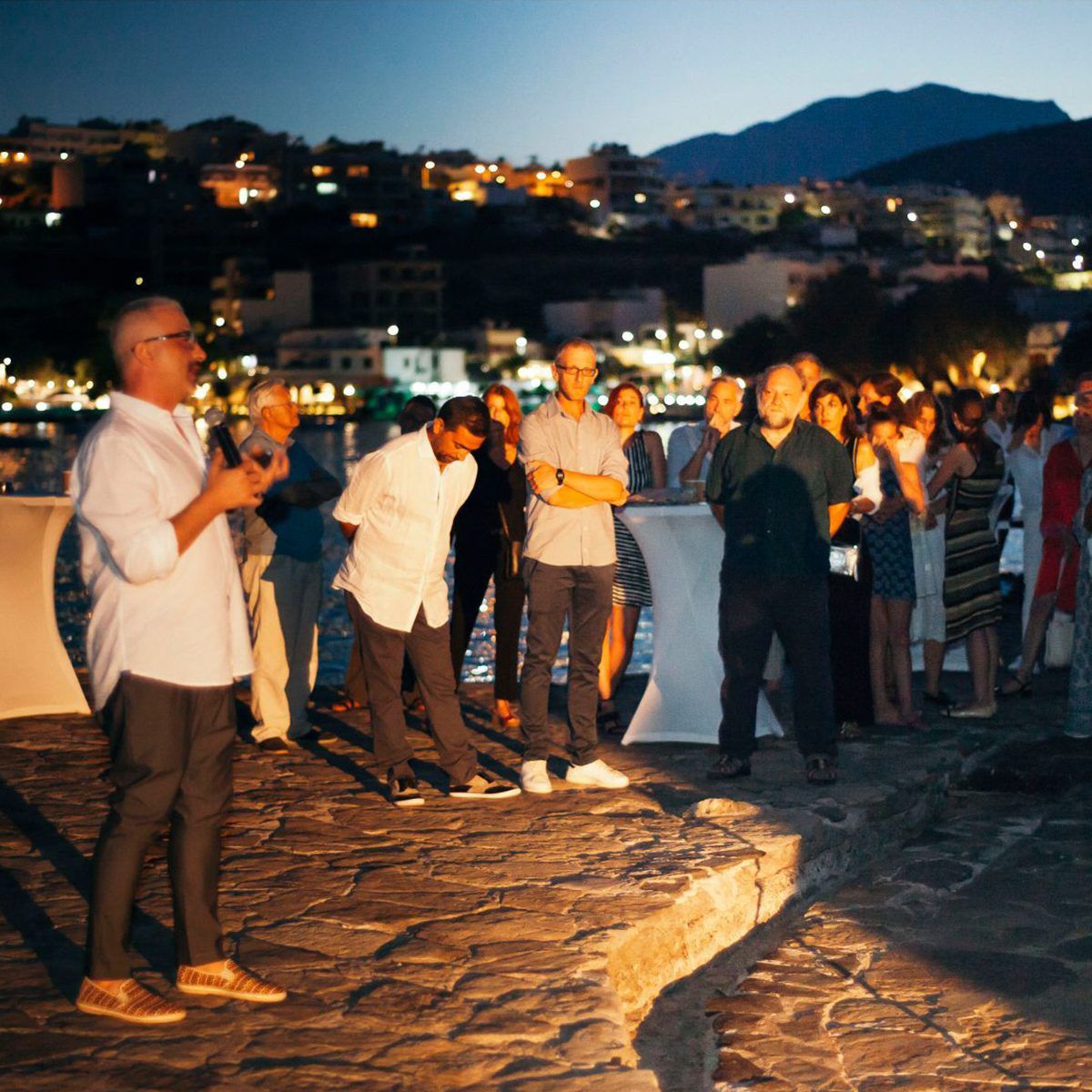 On the 13th and 14th of July 2019, the second blueFest Crete | Culture & Beyond was succesfully held at Minos Beach art hotel, in Agios Nikolaos, Crete.

In a perfectly organized two-day celebration, the festival managed to honor the goals of the G. & A. Mamidakis Foundation, which, having as a repository its long history, succeeded in highlighting the work of the Greek artists and producers, and to strengthen the links between tourism, culture and innovation.

Having devoted the first day of the festival to art and the second in the display of its rich Cretan land and gastronomy, the many and important guests and visitors of the blueFest Crete 19 | Culture & Beyond had the opportunity to enjoy the artistic events, but also to taste the delicacies from a plethora of gastronomic events, knowing at the same time one of the most beautiful parts of Crete.

Culture in the forefront

The opening of the festival took place on Saturday, July 13, when the exhibition “Come with the Wind” with the creation of the Theodoros Zafeiropoulos and the architect Yorgos Rimenidis, which won the “Art Prize G. & A. Mamidakis Foundation – Artists-in-Residence Program” was presented to the public. The project will remain in the Foundation’s permanent collection at the open-air museum of the Minos Beach art hotel.

Come with the Wind is a sound installation consisting of eight columns arranged around a central point, the position of each column corresponding to one of the eight points on an octagonal compass rose and creating a kind of peristyle. Sounds representing each wind are activated by motion sensors whenever a visitor approaches any of the sonic columns. This playful, interactive aspect of the installation allows visitors to hear the sounds that correspond to their position, and when there are enough visitors to activate all the columns, the space circumscribed by the columns is suddenly filled with a self-generated wind symphony.

An important feature of the installation is that the sounds reproduced by the sonic columns are digitally processed recordings of traditional music from eight different parts of the world, as defined geographically in relation to the prefecture of Lasithi, the easternmost prefecture of Crete. Music is thus transformed into wind sounds. At the same time, the columns themselves, hollow wooden reeds encased in metal frames, function as resonators which, depending on the actual wind in the area, produce an additional sound. The entire installation thus evokes a set of panpipes, an ancient musical instrument consisting of a series of reeds graduated according to length, but also the Hydraulis, a pipe organ from the Hellenistic period which was the precursor of the church organ developed in the Western world during the Middle Ages.

The public’s response to the Blue Nights exhibition which was curated by Sotiris Baketsetzis, art historian and artistic director of the G. & A. Mamidakis Foundation was impressive, a video art exhibition with works of Alexandros Kaklamanos (Full Circle,), James Lane (Oneiromancy) and Theodoros Zafeiropoulos (The Holy View), inspired by the tradition of summer cinema and managed to enchant visitors, filling them with nostalgia, through the Visitors visited the garden As of Minos Beach art hotel discovering the views that succeeded in a unique way to connect with the local element without borders unfettered sense must offer the TE-traces! The exhibition will run until October 20, 2019.

Visitors walked at the Minos Beach art hotel gardens and connected the local element with the borderless, unbounded sense that art has to offer! The exhibition will run until 20 October 2019.

Saturday’s actions were completed in a melodious way, through the performance of the wonderful musical performance “Radiotherapy” by the composer and permanent resident of Agios Nikolaos, Nikos Xynos. “Radiotherapy”, composed of a set of creations by the composer in lounge, ethnic, jazz rhythms, is counting for ten years of presence and is rightly found in the honor of the closing of the first day of the BlueFest Crete 19 | Culture & Beyond, demonstrating in practice the support given by the G. & A. Mamidakis Foundation to the local artistic community of Crete.

A taste of traditional Cretan gastronomy

In order to present and promote Cretan gastronomy and tradition in modern times, LoveGreece.com the initiative of the G. & A. Mamidakis Foundation for the recognition of Greek talent in any field of creativity with the aim of promoting the project successfully Greeks in the country and abroad, organized its third thematic presentation for 2019 concerning Gastronomy.

On the second day of the festival, on Sunday 14th of July, in an absolute partnership and friendly collaboration with the award-winning chef, Yannis Baxevanis, who has taken the position of consultant chef of the Bluegr Hotels & Resorts and is fully identified with LoveGreece.com’s vision of promotion of Greek entrepreneurship, the presentation of selected products and products from Crete was held.

Anatoli Agricultural Association with over 160 members of producers, Gerani family refreshments, Kalogeraki traditional dairy products, Kassakis family sausages, Domaine Vassilakis, Meraklidika by the Kyriakaki family, the successful pastries of Savoidakis family, the food of the Alexandrakis farm and the award-winning taste of the Karalaki farm, the innovative BioAroma, the pure products of the Zervou family with Galeni cheese, the traditional products of Physis of Crete and the Creta Carob treasures were presented and during the festival.