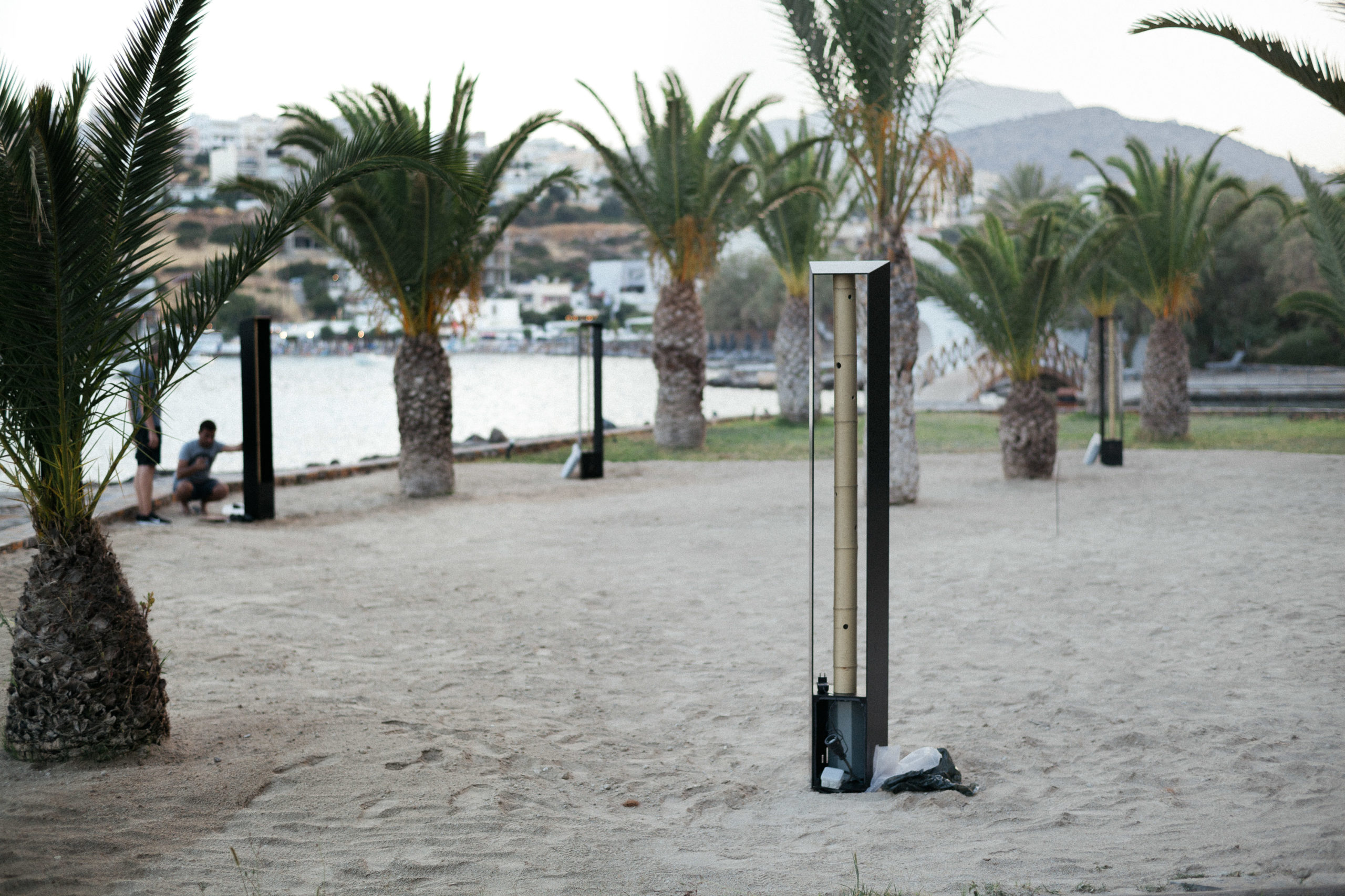 Τhe artwork «Come with the Wind» was the recipient of the 1st G. & A. Mamidakis Foundation Art Prize in 2019

The inaugural G. & A. Mamidakis Foundation Art Prize was awarded to artist Theodoros Zafeiropoulos (born 1978) and architect Yiorgos Rimenidis (born 1981) for their work Come with the Wind.

The site specific installation is a reimagining of the Tower of the Winds, the octagonal marble structure situated in the Roman Agora on the northern side of the Acropolis, as a sculptural installation incorporating a sound simulation of each of the eight winds of the Mediterranean depicted on the frieze of the ancient monument. The winds are denoted by the points on the compass from which they blow and are described in terms of degrees (starting from Earth’s magnetic north) and represented by symbols or by names (one official and one colloquial): Boreas/Tramountana, N (000Æ), Meses/Graigos NE (045Æ), Apeliotes/Levantes E (090Æ), Eurus/Sirokos SE (135Æ), Notius/Ostria S (180Æ), Lips/Garbis SW (225Æ), Zephyrus/Pounentes W (270Æ) and Sciron/Maistros NW (315Æ).

Come with the Wind is a sound installation consisting of eight columns arranged around a central point, the position of each column corresponding to one of the eight points on an octagonal compass rose and creating a kind of peristyle. Sounds representing each wind are activated by motion sensors whenever a viewer approaches any of the sonic columns. This playful, interactive aspect of the installation allows viewers to hear the sounds that correspond to their position, and when there are enough viewers to activate all the columns, the space circumscribed by the columns is suddenly filled with a self-generated wind symphony.

An important feature of the installation is that the sounds reproduced by the sonic columns are digitally processed recordings of traditional music from eight different parts of the world, as defined geographically in relation to the prefecture of Lasithi, the easternmost prefecture of Crete. Music is thus transformed into wind sounds. At the same time, the columns themselves, hollow wooden reeds encased in metal frames, function as resonators which, depending on the actual wind in the area, produce an additional sound. The entire installation evokes a set of panpipes, an ancient musical instrument consisting of a series of reeds graduated according to length, but also the Hydraulis, a pipe organ from the Hellenistic period which was the precursor of the church organ developed in the Western world during the Middle Ages.

The different sizes of the reeds in the sonic columns represent the speeds of the eight winds recorded in the region of Agios Nikolaos over the course of one year. Similarly, the metal disc in the centre of the installation is reminiscent both of the Phaestos Disc and of the golden record of sounds and images from the Earth carried by the Voyager spacecraft launched in 1977, intended for any intelligent extra-terrestrial lifeform. The disc is inscribed with icons representing each of the winds, thus creating new symbols of a highly original compass rose, as well as the vocabulary of a new pan-human symbolic language, bringing the allegorical figures on the ancient Tower of the Winds into the 21st-century.

Come with the Wind is supplemented by the sounds of the eight winds processed into performative ringtones, with visitors’ mobile phones functioning as speakers spreading an orchestrated sound environment like an ethereal whisper throughout the hotel complex. Guests will be able to download the ringtones when they enter the hotel’s internet network and use them during their stay or afterwards, taking the sounds of the winds with them everywhere they go. The sounds, the names and the representational versions of each wind are the lyrical elements of a potentially perpetual sonic composition which, artistically and architecturally, is open to possibility, and which the spectators of the work are invited to activate themselves.

The work is presented as part of the Art on Blue series of exhibitions organised by the G. & A. Mamidakis Foundation and curated by art historian Sotirios Bahtsetzis.